Why do we want apologies?

Children are taught almost as soon as they can talk to say “please” when they want something, “thank you” when they receive something, and “I’m sorry” when they hurt someone.

At the most surface level, we view an apology as a basic ritual of societal order that preserves a sense of fairness and responsibility.

Apologizing has become almost a knee-jerk reaction for many.

How often have you bumped into somebody or inadvertently cut someone off with your grocery cart and had the word, “sorry” out of your mouth without thinking? Even in such a minor interaction without much empathy or remorse behind the word, the apology still carries importance. When it is uttered, it acknowledges the infraction and its impact on the other person. When nothing is said, the other person feels invisible and insignificant.

At its most basic, an apology says, “I see you.” And a lack of an apology is a passive rejection.

What do we expect from apologies?

Pain wants to be heard; the need for our suffering to be acknowledged drives our need for an apology.

We often see an acknowledgement of the slight and remorse for the actions as the keystone in the bridge to healing. As though once that apology is received, the remainder of the recovery follows. And so we wait.

Because we want to be heard. Understood. And the pain keeps screaming until it is recognized.

What are the limitations of apologies?

Apologies can never undo what was done.

They are not a magical eraser than removes any harsh words or caustic actions. When we imbue them with these special powers, we increase our expectations to a level that can never be reached. 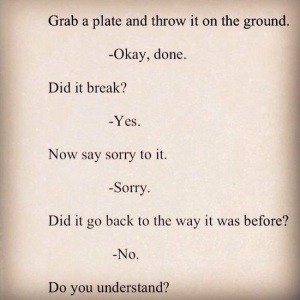 No apology will ever be good enough to abolish the pain and reverse the damage. Just as you cannot control somebody else’s apology, they cannot mitigate your suffering.

You can’t outsource healing. You have to do it yourself.

Do we need apologies?

An apology or a lack thereof is a reflection of the other person’s character, not your worth.

When somebody causes harm and refuses to accept responsibility, they are telling you who they are, not who you are.

When someone is too cowardly to admit fault, they are showing you their shortcomings, not yours.

And just because somebody displays an utter lack of empathy, it does not mean your pain is not real and valid.

When you wait for an apology, you are allowing the person who harmed you to continue to harm you. You’re letting them decide if you get to be okay again.

And is that really a decision you want to place in the hands of someone who lacks empathy and courage? If this person is still involved in your life and they are unable or unwilling to authentically apologize, take a good look at your boundaries.

Is this someone that you want to remain in your life?

How can you accept the apology you never received?

The most critical component of accepting an apology you never received is to eliminate any magical thinking you have about apologies.

They are no holy grail of healing. They do not have the power to erase what has happened. Once you realize that, it becomes easier to let go of the driving need for acknowledgement and amends. An apology is only required if you give it that power.

Your well-being should not hinge on somebody else’s shortcomings.

Their inability to accept responsibility is their problem.

Your healing is your responsibility. Accept it.

If you’re having trouble accepting an apology you’ve never received, this online course can help.

Lisa Arends is the author of the best-selling book Lessons From the End of a Marriage and a frequent blogger. Lisa inspires others through her blog, which is a space for those who have experienced the trauma that comes from the end of a significant relationship, and are seeking to move beyond grief and anger. Check out her blog. Be sure and check out Lisa’s online course, where she aspires to help those who feel victimized and stuck as the result of divorce. Learn more about her course, here.